You Are a New Leader Who Just Started a New Job. Now What?

Reema and I at Pixar HQ

As a new leader in a new job, you know you have 90 days to show your team, your manager, and your colleagues who you are and what you’ve got. Well, really, 30 days.

Leveraging what has helped you before, you decide to follow one of the approaches to starting a new role laid out in Michael Watkins’ book, First 90 Days, which is start-up, realignment, turnaround, and sustaining success. You are now at the thirty-day mark and reviewing what you’ve done so far.

Your calendar is packed with meetings with all of your stakeholders—up, down, across, and all around you. You want to spend more time with your team, but you are being pulled into meetings with your manager and the executive team. Everything shared with you is framed as needing urgent attention, but you are working to discern which is truly urgent and which is just important. Or, even better, can wait at least another month to address. You are really excited about this new gig, but the pace is ruthless. You spend Saturday catching up on some sleep, but then start again on Sunday.

This is a typical scenario for a new leader at a new company. Newly promoted leaders often feel this way, too, even if they have been part of the company for many years. Some of it is a natural part of every new role transition. However, just like everything else in the workplace, there are strategies to help you move through the “new leader stage” such that you establish yourself as an impactful one from the get-go. I have worked with hundreds of new leaders in my career. Here’s what the most successful have done in their first 30 days:

I recently had the opportunity to do this integration exercise with Reema Batnagar, the new Chief People Officer at Pixar, and her team. In the process, certain questions are given to the team and others to the leader. Here are some of the questions given to the team:

Here are some of the question given to Reema:

Reema and the team then discussed their respective answers together. Reema spoke about her compassionate leadership style, the behaviors she is unwilling to tolerate, and what she’d like to see more of across the team and organization. The team shared great advice for her to succeed as a leader. They also gave suggestions for how best to leverage them for decisions, and most importantly, create priorities within an interconnected strategy.

At the end of the day, Reema and her team were clearer about how they were going to tackle objectives and more excited about working together as an aligned Talent Strategic Operations Team.

Edna Mode of “The Incredibles” would have been proud of how direct and clear the entire team was about what they wanted, expected, and hoped for the future. 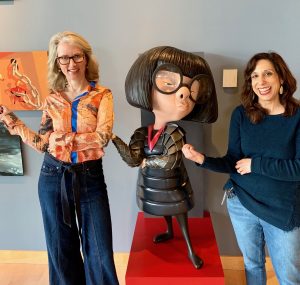 “To have a firm persuasion in our work—to feel that what we do is right for ourselves + good for the world at the exactly same time— is one of the great triumphs of existence.”

This site uses Akismet to reduce spam. Learn how your comment data is processed.